Call our friendly podiatrists today on (08) 9586 3046
Blog
Home > Blog > How To Prevent Fungal Infection In Toe Nails Through Podiatry?

How To Prevent Fungal Infection In Toe Nails Through Podiatry?

The infection of the toenails affects a large number of people and is caused by factors such as senility, trauma, poor foot hygiene, damp climate, disease, and an unfit footwear. The infection does not only result in pain in the initial stages, it can be a cause of worry should it spread or increase in its severity. Also known as onychomycosis, the ailment spreads from a fungus, which if left untreated, can end up destroying the nails. Importantly, since the initial manifestation of the ailment does not cause pain, most people suffering from it are not aware of the infection. 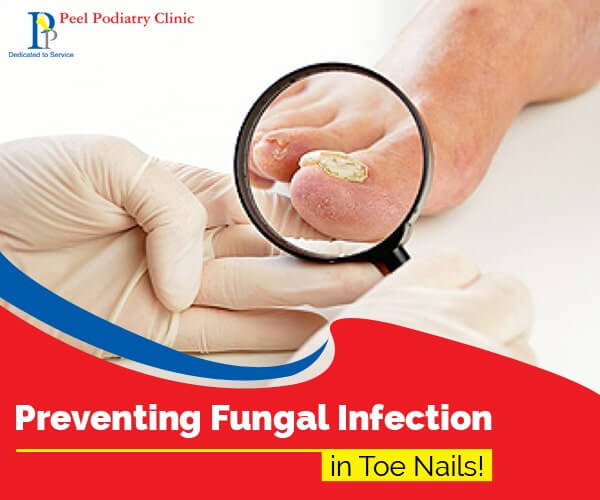 Causative factor(s): As mentioned earlier, toenail infection is caused by fungi or microscopic organisms called dermatophytes that feed on a protein found in the nails or hair called keratin. Since the microscopic organisms are typically found in dark, moist, and warm environment such as inside your shoes, it is difficult to avoid any contact with them. And once the infection sets in, the toenail becomes thick, losing its shine and colour and turns brittle. The thick but brittle toenail puts pressure on the soft tissue underneath causing pain. If the pressure is prolonged, it can lead to an ulcer in the underlying tissue. This can further lead to the crumbling of the toenail and its eventual separation from the nail bed causing intense pain. This can impair the normal movement of the person.

Prevention: Even though staying away from the microorganisms causing the infection may not be feasible, one can limit the contact or prevent the infection from spreading by following steps like.

Treatment: The treatment of toenail fungal infection can be time consuming given the severity of the infection. However, it can be effectively treated by a Podiatrist like the one working at the Podiatry clinic in Mandurah. The treatment plan comprises the following steps.

Debridement: The infected thickened and discoloured toenail is debrided or removed to reduce the pressure on the underlying soft tissue.

Topical application of medication: Anti-fungal medication like Fungoid Tincture or Ciclopirox etc is applied at the infected site.

Oral medicine: Medications like Terbinafine Hydrochloride and Itraconazole approved by the US based FDA can be used concurrently with the topical application as mentioned above.

Photodynamic Antimicrobial Therapy (PACT): Since the microorganisms have a cell wall, the PACT based dye or gel applied on the infected area turns the latter sensitive to light. Thereafter, a specific wavelength of light sets off a chemical reaction killing the infected cells instead of the surrounding healthy ones. This is a painless and effective way of treating the toenail infection by the Podiatrists at Mandurah.

Conclusion
Prevention is better than cure, so goes the saying. So, one should follow the preventive steps in a diligent way. However, should the toenail get infected, it is better to approach a Podiatrist to get cured.